Bank analysts and ratings agencies continue to respond to the Q2 growth figures with upgraded GDP forecasts and improved credit ratings, reflecting a growing confidence in the Greek economy.

GIG Team September 20, 2021
0 100 3 minutes read
Economic BulletinInsights
An improved fiscal and economic position along with positive public health developments, particularly with respect to vaccinations, are prompting banks and ratings agencies to revise upwards their growth forecasts for the Greek economy. Canadian-based ratings agency DBRS Morningstar increased Greece one notch to BB and its outlook to Positive. Meanwhile, gross investments in Greece reached €10 billion in the first half of the year, marking a 16% yearly increase compared to 2019.

DBRS Morningstar upgraded Greece’s credit rating to “BB” from “BB (low)” and changed its trend rating from “Stable” to “Positive.” The upgrade reflects Greece’s improved fiscal and economic position prior to the pandemic, which the ratings agency believes puts the country in a better position to manage ongoing challenges.

Alpha Bank sees the prospect of 6% growth this year based on the quick recovery foreshadowed by Q2 figures. NBG revised its previous estimate of 5.9% up to 7.5%, with Q3 growth at 12% and Q4 at 5.5%. Both forecasts hinge on positive development on the public health front, including a boost in national vaccination rates.

Wood and Scope Ratings are planning to revise their growth forecasts to 6.5% and 8.6% respectively, according to statements by the agencies to the Greek media. Moody’s Analytics and Oxford Economics see growth of 8.2%, and Capital Economics at 8.5%, while UBS is forecasting 7.9%.

Seasonally adjusted unemployment dropped to 14.2% in July from 15% in June according to figures compiled by the Hellenic Statistical Authority (ELSTAT). The figure is the lowest on record since November 2010. The number of employed people increased by just under 183,000 Y-o-Y to exceed the 4 million mark, while the inactive population decreased by 105,000 to reach 3.18 million. The number of unemployed also fell by 108,000 to 664,400.

A survey of 760 Greek employers conducted by Manpower Group found that 20% expect to see a rise in employment in Q4, 15% expect a drop, and 61% expect employment levels to remain stable. Around 72% of respondents said they expected to have trouble meeting their skills requirements.

The Greek authorities have set an objective to prepay the outstanding balance of the IMF and bilateral loans the country received in 2010, using the cash reserves which currently stand at €40 billion. The plan relates to €1.7 billion of IMF loans and €2.65 billion of bilateral loans.

Tax revenues in August came in just €41 million short of the target, exceeding expectations at the Finance Ministry which were set low due to an extension granted for the submission of tax returns, which was expected to delay payments estimated at €200-250 million into September.

Finance Ministry officials are expecting to see €9-10 billion of tourism revenues this year, equal to 50-55% of 2019, and are not ruling out the prospect of €12 billion based on the evidence so far regarding September and October.

Gross investments rose to €10 billion in H1, a 16% increase on the same period in 2019. The difference was made by 400 projects by medium-sized firms, and exceeds the government’s expectations, suggesting a positive shift in the economic paradigm.

Construction projects totalling €11 billion will be moving into the implementation phase by 2023. They include Line 4 of the Athens Metro worth €1.2 billion, highway projects each valued between €145 million and €1.8 billion , the first stage of the Hellinikon development at €1.4-1.8 billion, and railway upgrades worth close to €0.5 billion. The construction sector, however, is warning that there needs to be a framework put in place to adapt costs due to inflation, as commodity prices are creating inflationary pressure.

State privatisation fund HRADF will be leveraging its experience to prepare €2 billion worth of public investment projects to absorb RRF funding, under its new Project Preparation Facility. Projects include the redevelopment of Heraklion Airport, upgrades to 80 hospitals and the relocation of Korydallos Prison.

The growth in building activity slowed down to 17.6% Y-o-Y in June from 62.9% in May, according to the latest figures published by ELSTAT. May’s figures reflect the immediate post-lockdown rebound.

Alpha Bank’s senior preferred note was oversubscribed 1.5x within the first hour of opening the book, with final demand reaching €2 billion. More than 60 accounts were involved, reflecting strong institutional demand, and the issue raised €500 million with the yield settling at 2.625%.

The government is preparing to extend the remit of the HFSF, the vehicle which holds the state’s share in the systemic banks, beyond guaranteeing the stability of the financial system to actively managing the state’s holdings, which may include divesting from some of its stakes in the banks. HFSF currently holds 9% of Alpha Bank, 1.4% of Eurobank, 40.3% of NBG and 27% of Piraeus Bank.

The ASE general index closed the week with marginal gains of 0.2% to close at 912.81 points. 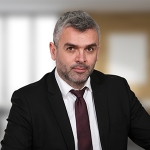