The pandemic lockdown, coinciding with Q2, resulted in a -15.2% quarterly fall in GDP, putting Greece in line with the EU average. However, a new market foray for Greek bonds confirmed that the country’s debt has returned to favour with investors.

GIG Team 3 weeks ago
0 37 2 minutes read
Economic BulletinNewsInsights
While results for the first half of 2020 place Greece on track for a yearly recession of 8%, a record-low yield on a 10-year government bond issuance suggests investors are confident about the economy’s capacity to bounce back. Greece’s Terna Energy is preparing a €1.5 billion investment in green energy, while the country’s real estate market is showing signs of restructuring in response to the effects of the pandemic on the tourism sector.

The Greek economy experienced a -15.2% Y-o-Y contraction in Q2, the period coinciding with the coronavirus lockdown, putting it on track for an annual recession of -8% GDP. The biggest hit was felt by exports, which dropped by 32%, and specifically those in the services sector, including tourism, which were down by 50%. The figure released by the Hellenic Statistical Authority (ELSTAT) was marginally better than earlier expectations, meaning that the government does not need to significantly alter its budget planning.

The Manufacturing Purchasing Managers’ Index (PMI) edged up to 49.1 points in August compared to 48.6 in July. According to index compiler Markit, the uptick coincided with a return to growth of employment and a pick-up in business confidence to a six-month high, however recovery is expected to be slow over the medium term due to the halting pace of the global economic recovery.

Greece drew €2.5 billion from the markets by reopening the book on its 10-year bond which matures on June 18, 2030. Demand was strong, attracting €16 billion in offers, with the yield settling at 1.187%, a historic low for a Greek 10-year issue.

Swedish servicer Intrum is the preferred bidder for Piraeus Bank’s €1.9-billion Phoenix securitisation. This securitisation will be followed later in the year by the Vega portfolio, which is valued at €5 billion. Phoenix is covered by the state-backed Hercules scheme, which will provide guarantees for approximately €1 billion of senior notes.

Eurobank reported an adjusted net profit of €176 million in the first half of the year (H1), with non-adjusted results showing a loss of €1.17 billion, taking into account a €1.33 billion hit from the Cairo securitisation and the associated sale of servicing arm FPS. Following the Cairo transaction, Eurobank’s NPE ratio stands at 15.3% in H1 compared to 32.8% in H1 2019.

A survey by the industry association revealed that eight in ten Greek retailers experienced a drop in revenues during the summer sales, while seven in ten said they were unprepared for the severity of the pandemic’s impact on their business.

Ferry companies reported that passenger traffic was down by -40% in August, and -60% since March, resulting in lost revenue of €300 million. This translates into a loss of -45% compared to last year’s €700 million.

TERNA Energy is readying a €1.5-billion package of green energy investments, starting with a 330 MW wind farm on southern Evia dubbed Project Kafireas. Terna already controls a total 1,373 MW of wind projects worldwide, 728 MW of which are located in Greece. The company plans to fund the investment through a combination of bank borrowing and bond issues, while it is also looking to attract strategic investors.

An estimated 14% of listings were removed from the Airbnb platform in central Athens between February and August 2020, as the lockdown and an anaemic tourist season have suppressed demand for short-term lets. A parallel 80% increase in the number of long-term rentals coming on the market suggests a shift in strategy by landlords. The sudden increase in supply has translated into a -9% drop in listed rental prices according to research by property site Spitogatos.gr.

The ASE general index closed the first week of September up 0.75% at 639.29 points, with trading volumes remaining low and no significant news to move the markets. 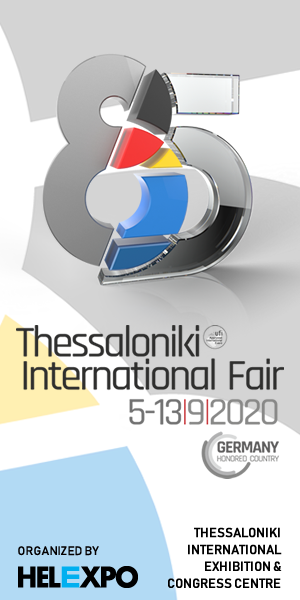 In spite of Greece’s country-wide lockdown, its property prices saw a 4.1% increase in Q2 on a Y-o-Y basis - an encouraging sign of the sector’s resilience. Meanwhile, in Q1, prices increased by 6.6% Y-o-Y, while over the entire 2019 prices increased by 7.2%.

Pleased to join @SecPompeo and my friend Min @NikosDendias to review the gains we've made this year in all areas of the US-Greece relationship. We will continue to invest in northern Greece and support Greece's efforts to build peace, stability, and prosperity in the #EastMed.

Greece is gearing up to start its “I Save at Home” programme, worth €850 million at this point, and they’re hoping that investors will recognize that now is the time for energy investment.

Minister of Development and Investment @AdonisGeorgiadi is delivering a “new Greece” through the creation of the new National Development Plan.

Santorini has topped nearly every traveler’s bucket list at one time or another, and it’s easy to see why. Blue isn’t just blue in Santorini, it’s so cosmic and deep it feels like you could fall into it forever.

In spite of Greece’s country-wide lockdown, its

Greece is gearing up to start its “I Save at Hom

If luxury is what you’re looking for, Principote

Greece’s public transportation network is on the