GIG: Greek borrowing rates have improved considerably – more so than Greek ratings have. Is that, in your opinion, a fair reflection of the improvement in the underlying fundamentals of the Greek economy?

James: Ratings are a credit opinion and related to fundamentals rather than a market indicator that can be volatile. The DBRS Morningstar global methodology looks at a broad array of political, economic, fiscal, monetary, balance of payments, public debt, and liquidity factors in order to assess governments’ ability and willingness to service debt obligations. Yes, current borrowing rates are important, but funding costs and their impact on debt affordability reflect one of many factors considered in the rating process.

It is encouraging that market funding costs are now close to the average interest rate on European Stability Mechanism (ESM) debt that comprises the majority share of Greek public debt. Quantitative easing and greater confidence in Greece’s economic recovery are important in this respect. At the same time, Greece has pre-paid more expensive IMF debt. The consideration of overall interest costs, for example, benefits countries that consistently issue debt at low interest rates throughout the economic cycle. At the same time, elevated debt stock levels in Greece can limit fiscal flexibility, lead to volatility in market borrowing costs, and dampen growth prospects, partly explaining the cautious approach to rating upgrades.

GIG: Is the European Securities and Markets Authority( ESMA ) framework an obstacle to the timelier reflection of fundamentals in ratings?

James: The framework includes measures to reduce the risk of market volatility in relation to the timing and frequency of publication. For example, in December, DBRS Morningstar will release the 2020 EU sovereign, sub-sovereign and supranational publications calendar. The ESMA framework provides some flexibility when necessary. For example, deviation from the EU calendar occurred in June 2018. The upgrade reflected medium-term debt relief measures for Greece announced by the Eurogroup. Deviations ought not to happen routinely to preserve market stability but are important should events require it. Ordinarily, six-month publication cycles should adequately reflect fundamentals.

GIG: What are the challenges that Greece needs to focus on for a further de-escalation in rates?

James: Interest rate peer analysis appears favourable in the current international bond market environment. The Greek government is expected to deliver a growth-friendly and social-inclusive fiscal policy mix, while at the same time maintaining primary surpluses. This presents a significant challenge but is possible with a government majority. While important legislative groundwork is either complete or underway, results will be key. Reforms such as the Invest in Greece growth and development bill aim to address impediments to investment. In addition, fiscal measures presented in the 2020 draft budget skew the fiscal mix towards growth supportive measures. In fact, the new government’s reform commitment and momentum, if sustained, enhance Greece’s long-term growth prospects, a positive credit factor.

On 10 October 2019 the European Commission approved Greece’s plan known as the Hercules Project (HAPS) to accelerate the reduction of banks’ non-performing exposures (NPEs). This may, by further strengthening banks’ balance sheets, help build on the recovery in bank credit to corporations and reverse the contraction in bank loans to households. The HAPS, which involves NPE portfolio securitisations with around €9 billion of government guarantees for senior tranches, could help the banks offload around €30 billion of bad loans, according to the government. The implementation of the HAPS could support banks’ efforts to clear their balance sheets from legacy loans and to also aid the recovery of the economy.

GIG: In an ideal scenario, what time frame would you envisage for Greece to achieve an AAA rating? What would it take?

James: Greece would need to have the credit fundamentals and bond market resilience of DBRS Morningstar’s AAA-rated sovereigns, for example, Switzerland, Norway, Germany, the U.S., and the UK. For now, it’s important for Greece to aim for an investment grade rating. DBRS Morningstar’s current rating for the country is BB (low) with a positive trend; we will review it within six months. It will be helpful for Greece to continue with current policies and, in particular, to generate primary fiscal surpluses. Since 2010 Greece has undertaken an unprecedented fiscal adjustment. In the 2020 draft budget, the Greek authorities project a primary surplus of 3.7% for the current year and 3.6% for 2020, above the 3.5% target.

The high level of NPEs, the highest in the European Union, at around €75 billion or 43.6% of gross loans at end-June 2019 continues to remain a challenge for Greece. The four systemic banks aim to reduce their NPEs significantly by end-2021 and have submitted updated operational targets to the Single Supervisory Mechanism (SSM).

GIG: The Greek banking sector is still experiencing tight liquidity and some corporates are turning to bond issues. Do you see this as a temporary shift or the start of a more permanent switch to non-bank lending?

James: Accessing capital markets is cheaper than other traditional funding in the extended quantitative easing environment, and it is good to diversify financing sources. Much will depend on future funding needs and whether or not capital spending and project infrastructure rebound with the stable political environment. As the sovereign deepens its market access, it is likely that corporates will do so as well.

GIG: What would be the key downside risks to your rating at the moment?

James: We published our rating on 1 November 2019 with the following factors potentially leading to negative rating action: (1) a reversal or stalling in structural reforms; (2) material fiscal slippage; (3) renewed financial-sector instability. 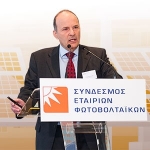 With €2.5 billion worth of PV projects earmarked for development by 2030 and investments yields that are, comparatively, close to 30% higher than its Northern EU counterparts, Greece’s solar energy market presents a “higher-risk”, high-reward scenario, says Sotiris Kapellos, President of the Hellenic Association of Photovoltaic Companies, while stressing that the key to reaching Greece's solar energy capacity targets is the simplification of its long-winded licensing procedure.
Read the full interview