Western Greece, via the port of Patras, is seen as Greece’s gateway to markets in western Europe.

Western Greece comprises the western part of continental Greece and the northwestern part of the Peloponnese. Its main economic activities include tourism services and agriculture, with wine and olive oil production being particularly important as well as dairy products and fish farming – a traditional source of income and a major export sector.

Western Greece is developing its tourism sector with recent hotel investments, making it more attractive to visitors. The region is home to ancient Olympia, one of Greece’s most visited archaeological sites, and draws hundreds of cruise ship visits to the town of Katakolo.

The city of Patras, the capital of Western Greece, is home to the region’s major port and almost a third of the region’s population. The port is regarded as Greece’s gateway to western Europe, linking the country via ferry service to Italy – and onward – by road to major markets in northern Europe. Greece’s privatisation fund HRADF is set to roll ahead with procedures to launch tenders for the privatisation of the port throughout 2020.

The region is also considered an important driver within the scope of national innovation, having accounted for 6.3% of gross expenditure on research and development in 2015.

Site of ancient Olympia, one of Greece’s most popular tourist attractions

Potential hydrocarbon reserves onshore and in the waters off Western Greece

Copyright: Cristi Savin / Shutterstock
Place your mouse over a sector to view its regional opportunities. 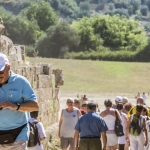 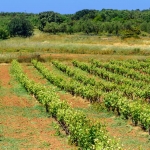 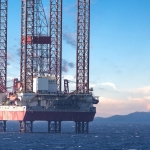 Growing off a low base, tourist arrivals have jumped 36% in two years.

Western Greece is emerging as a new tourism destination for the country, with recent investments in the northwestern Peloponnese helping to upgrade the tourism product. According to the Greek Tourism Confederation (SETE), the number of tourists visiting the region jumped to 699,000 in 2018, up from 513,000 two years earlier. The region is the site of ancient Olympia, one of Greece’s most popular tourist attractions. But overall, Western Greece attracts only about 2% of national tourist arrivals and collects just 1.4% of tourism receipts.

Western Greece’s food exports are rising, with the region accounting for 2% of Greek exports.

Western Greece is home to much of Greece’s fish farming industry and produces approximately 12.5% of total European Union production of sea bream and sea bass. The region’s wine industry accounts for roughly 17% of Greece’s total production, and four wine-producing districts have been awarded Protected Designation of Origin status. The region is also a top Greek producer of fruits and vegetables like strawberries, kiwis, and asparagus, as well as Greece’s leader in organic livestock production.

The Greek government has mapped out two onshore oil exploration blocks in Western Greece and two offshore blocks, including one that is licensed for production. Combined with exploration taking place in nearby Epirus as well as Albania and Montenegro to the north, there are indications that the Ionian Sea, the Adriatic, and the western slope of the Dinaric Alps may harbour vast oil and gas reserves. The region also boasts potential for investments in renewables, particularly wind energy, ranking 4th out of 13 in terms of installed capacity in 2019, according to the Hellenic Wind Energy Association, with 309 MW.

Western Greece is a major exporter of agricultural products, such as aquaculture, olive oil, and wine, helping to support the local economy.

Patras is Greece’s third largest city and accounts for one third of Western Greece’s population.

The city of Patras is the commercial hub of Western Greece and has been growing steadily in population over the last 20 years, with an estimated 213,984 inhabitants within the municipality based on the last census in 2011. It hosts two universities, a science park, and several research institutes that have drawn a large population of students and young workers. Every year, the city hosts its annual carnival, one of the largest in Europe.